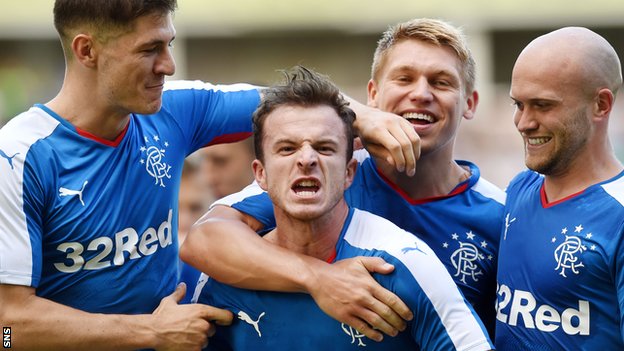 
Rangers midfielder Andy Halliday says it is time for the club to win the Petrofac Training Cup after three previous failed attempts.

The Ibrox side play host to last season’s winners Livingston on Tuesday night in the quarter final.

“It’s obviously the fourth season Rangers have been in the Petrofac Cup and they’ve yet to win it,” said Halliday.

“It’s something we’re hoping to add to the collection this season.”

He added: “We’ve not won it for the four seasons we’ve been in it and we need to put that right.

“The main factor is we want to win every game and win every cup that we are involved in this season.

“There are a few teams that stand in our way and obviously the first is Livingston.”

Rangers lost to Queen of the South in the quarter final of the 2012-13 tournament. They were beaten in the

while last season Alloa knocked them out at the semi-final stage.

For Halliday it is another chance to face the club who gave him his first taste of senior football seven years ago.

“I really enjoyed my time there it’ll be good to play them again as it is a big occasion for myself and the club,” said Halliday.

“We played Livingston a few weeks ago and they were very organised and a hard team to beat. They had quite a lot of athleticism in their team, so we know it’s going to be a difficult game but we just need to take care of ourselves.”

Rangers manager Mark Warburton echoed the thoughts of Halliday, but he also has a personal incentive as this now gives him the chance to win his first trophy since taking charge of the Ibrox club, having been knocked out of the League Cup by St Johnstone.

And, unlike some teams in the past, he is not treating this as an inferior competition.

Warburton said: “You can’t go into a squad of players and talk about a winning mentality and then say this isn’t high on our list – far from it.

“It’s a game we want to go and win. We’re two games away from a cup final and silverware and another honour for the club.

“For the supporters we’re very much aware we’ve got to go and win the game and that is our intention.”

Since that League Cup defeat to St Johnstone, their only one this season, Rangers have kept up their 100 percent record in the Championship after ten games, with a late winner securing three points against Queen of the South on Saturday.

Warburton said: “Look at the reaction to St Johnstone. It was important how we reacted to that evening. Right now this is a big game.

“If we can get our focus right, we have to deliver another performance.”