Posted by: Inside Futbol in Latest News 21st November 2015

Rangers have confirmed their starting eleven and substitutes for today’s game at the Tony Macaroni Arena against Livingston in the Scottish Championship.

Gers boss Mark Warburton sticks with the same side which beat Alloa Athletic 4-0 before the international break, meaning Wes Foderingham is between the sticks, behind a back four of James Tavernier, Dominic Ball, Rob Kiernan and Lee Wallace.… 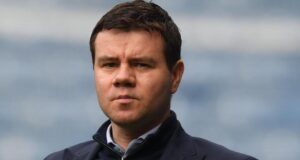